Hillel the Elder, lived about 2,000 years ago and was one of the greatest sages in Judaism. The Talmud notes that when asked by a prospective convert to Judaism to teach him the entire Torah while he stood on one foot, Hillel succinctly replied “that which is hateful to you, don’t do to your neighbor. This is the whole of the Torah; the rest is commentary. Go and study”. That story is one of many in the Talmud that attempts to encapsulate a meta-value of Judaism.

In The Great Principle of the Torah – Examining Seven Talmudic Claims To The Defining Principles of Judaism (Kodesh Press 978-0692631560), Rabbi Jack Bieler examines that story, and 6 others, that also try to detail Judaism’s moral imperatives. 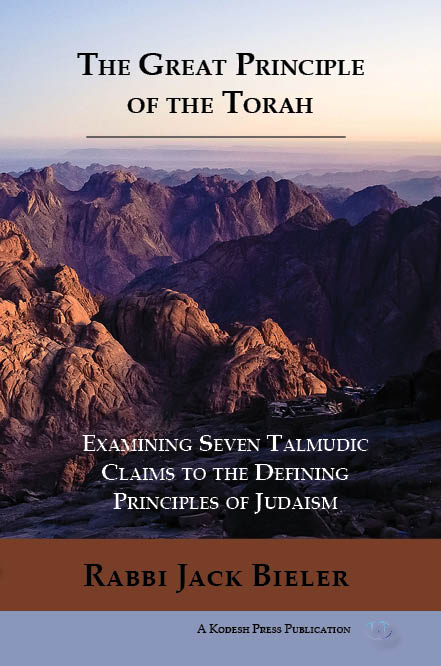 The challenge of talmudic narratives is that their initial brevity and simplicity overlay an underlying profundity and complexity. In this fascinating book, Bieler gets to the fundamentals and analysis of just what the essential message of Judaism is. In the introduction, he writes that he’s been continually amazed at how little serious and prolonged reflection was devoted to making sense of the goals of Jewish tradition and literature.

The goal of the book is to determine if and what the meta-values of Judaism are. The seven selections each attempt the difficult task of trying to define the essence of Judaism.

In each chapter, Bieler quotes from a wide set of classical commentators who interpret the meaning of these values. Are they complementary, contradictory? How do they interact and what do they mean? Bieler deals with these in details and each chapter concludes with the contemporary implications of each of the values.

Some of the values the book details are universalism, faith, God consciousness, pleasantness and peace, loving kindness, and adherence to the law.

Bieler concludes that not surprisingly, there are no simple answers. Some of the values he details can be antithetical to one another. Questions of individuality vs. community, justice vs. compassion, logic vs. faith, and more; require that a person make significant moral choices.

Part of these choices are contemplation via reflection and deliberation of these issues. This leads to the introspection that can make a person less mechanical, and more of a thinking individual; to which is a significant challenge today. He concludes noting that while the development of adopting a reflective approach towards the desired minds and behaviors of the 7 tests quoted is a lifelong process, it’s clearly the point to which everyone should dedicated their best efforts.

The author’s blog has two sets of study guides that can be used independently of his book, or as a means of preparing ahead of time before considering the arguments made in the book itself.

This is a deep, yet quite rewarding book. Bieler writes in a cerebral approach, that may be a challenge for some readers. In the book, he’s started a discussion of what the point of Judaism is. And that is a conversation every Jewish person should be part of.

View all posts by kopress →

radically opposing points of view are all countenanced in Torah study so long as they come from a sincere and respectful quest for truth
“thoughtful, careful, meaningful and clear”