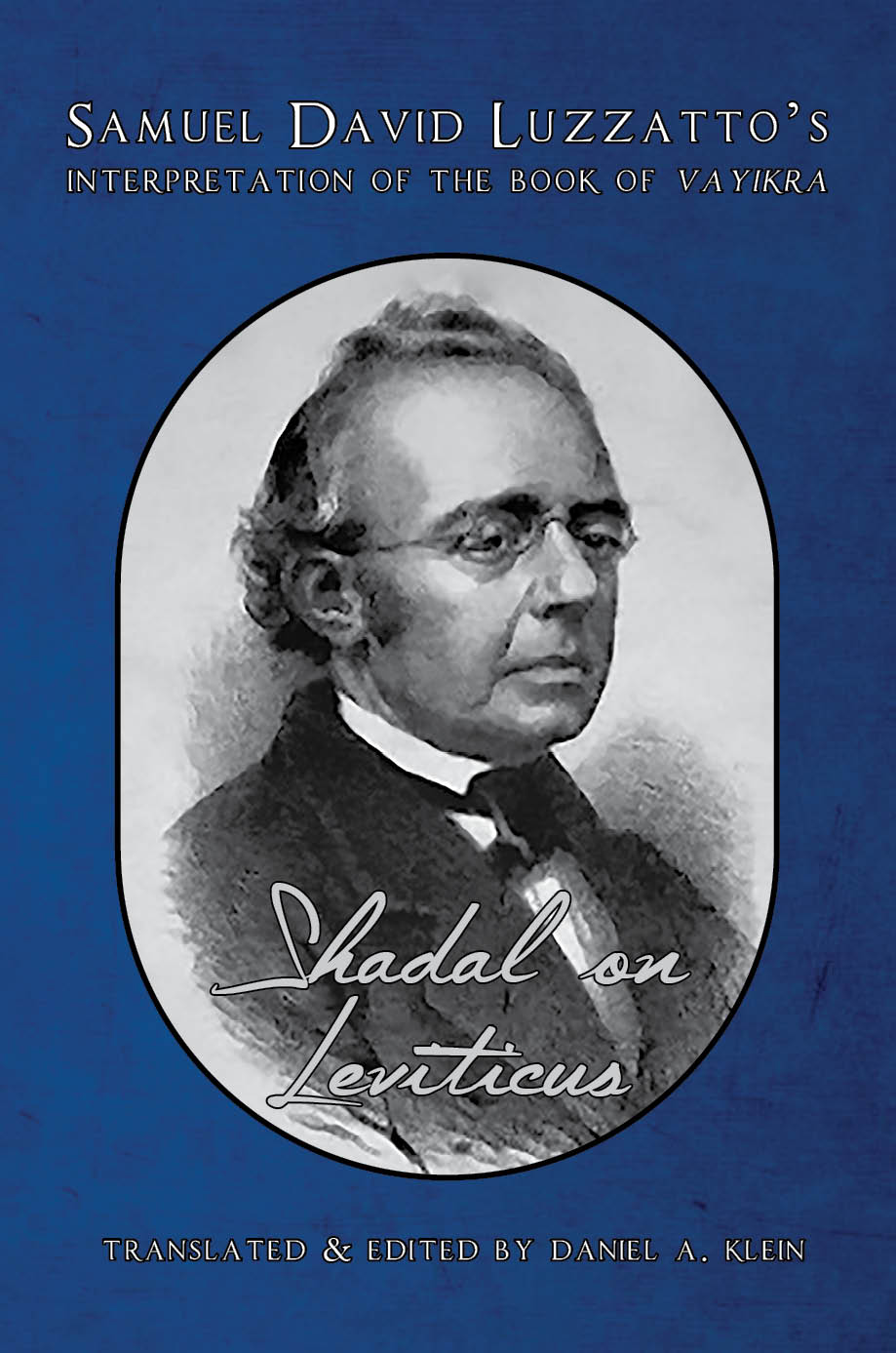 Review of Samuel David Luzzatto’s Interpretation of the Book of Vayikra, translated and edited by Daniel A. Klein
Review by Professor Martin Lockshin

Samuel David Luzzatto (1800-1865), known as Shadal, has long provoked intrigue. He was the leading Italian Jewish scholar of the nineteenth century, yet he refused to be ordained as a rabbi himself, repeatedly declining the offer of his colleagues. He spent most of his life teaching in the Modern Orthodox rabbinical seminary in Padua, the Collegio Rabbinico, yet some contemporary readers who like to draw boundaries raise doubts about whether he could even be called Orthodox.[1] In fact, this question is not entirely the invention of moderns: although Shadal considered himself Orthodox, he wryly admitted that others might disagree. He understood, for example, that some critics would consider heterodox his understanding that much of the classical rabbis’ “interpretation” of legal passages in the Torah was really legislation, not interpretation. Further, he was a respected member of Wissenschaft circles, committed to the academic study of Judaism, but at the same time was deeply opposed to a rationalist Greek philosophy, including Rambam’s approach, on ethical grounds.

And yet, the abiding fascination with this vastly erudite Jew’s life pales in comparison to the import of his written work. Shadal’s prolific literary output included an insightful commentary on the Torah that was unique in its time and continues to speak to readers today. It focused on the peshat (the plain meaning) of the text and on the moral and religious messages that the peshat contains. That alone does not seem terribly unusual, but Shadal was also an expert in Hebrew and other Semitic languages. Well acquainted with the research of Jews, Christians, traditionalists, and critical scholars, he cited any source, kosher or otherwise, that helps advance our understanding of the biblical text. He was perhaps the first Torah commentator to draw liberally both from the writings of Bible critics and the traditional medieval Jewish commentators. Since his time, very few others have followed that path. A strong defender of the antiquity and divinity of the Torah, he still found insights in the interpretations of Jews and gentiles who did not share his beliefs.

Shadal’s Hebrew-language Torah commentary was never published in his lifetime. In 1871, six years after his death, the first volume (Bereishit) of the commentary was assembled, compiled from transcripts of his lectures faithfully recorded by his students at the Collegio Rabbinico, and published together with his translation of the Torah into Italian. By 1875, all five volumes appeared.

In recent decades, Shadal’s Torah commentary has achieved new-found popularity.[2] Academic studies about him include a full-length Hebrew book by Professor Shmuel Vargon of Bar Ilan University, S. D. Luzzatto: Moderate Criticism in Biblical Exegesis (2013). Outside of academia, Jews have also been studying the commentary more. Nehama Leibowitz, leading Bible teacher of the twentieth century, cited Shadal’s commentary frequently, both orally and in her prolific writings.[3]

In 1965, Shadal’s Hebrew Torah commentary was republished in a censored version that removed some of the passages where Shadal cited non-Orthodox sources. This censored text was translated into English in 2012, in an unhelpful edition that lacked explanatory notes. In 2015, a handsome five-volume edition of Shadal’s Hebrew Torah commentary was published in Israel, edited by Yonatan Bassi (Carmel Books). This edition includes more of Shadal’s comments than the 1871-1875 edition, taken from notes of his students, and shows how frequently he changed his mind over the years about the interpretation of the texts, a sure sign of his intellectual honesty. Sadly, this edition also lacked explanatory notes and was riddled with typos. Thanks to the work of Hillel Novetsky, a better Hebrew edition of the commentary is now online.

A true scholarly achievement in the field is the work of Daniel A. Klein, a lawyer who, on the side, has been methodically translating Shadal’s Torah commentary into English for the last 23 years. His third volume, Samuel David Luzzatto’s Interpretation of the Book of Vayikra (New York: Kodesh Press, 2021), was just published. His work, which hopefully will eventually comprise Shadal’s complete Torah commentary in a five-volume set, includes a number of helpful features. He is the first Shadal scholar to include a translation of Shadal’s Italian translation of the Torah with his commentary. By translating Shadal’s Italian into readable English, Klein performs a real service for us non-Italian readers. This is especially useful in the newest volume, as Shadal, like many of his traditional predecessors, had considerably less to say about Leviticus than about the previous books of the Torah. At times, dozens of verses in a row have no commentary at all. Since, as we know, every translation is in effect a commentary, English readers can at least see how, on the most basic level, Shadal understood those verses.

Klein makes another contribution here by including a series of short scholarly essays that contain a discussion of Shadal’s Orthodoxy—including an analysis of Shadal’s ostensibly non-Orthodox position about shaving with a razor—and a translation of a lengthy but interesting Italian letter that Shadal wrote to a spiritual seeker. And finally, Klein’s edition contains explanatory notes, which are especially helpful for understanding Shadal’s frequent references or allusions to other writings (both his own and those of his contemporaries) that few of us have on our bookshelves.

Unusually for the annotated translation genre, Klein sometimes goes off on tangents. He shares his research on tzaraat (generally translated as “leprosy”), which extends far beyond what is necessary for understanding Shadal. Surprisingly, he even occasionally takes issue with or expands on Shadal’s commentary. To give one example, Shadal explains the reason behind the laws against brother-sister incest, writing (Klein’s translation of the commentary to Leviticus 18:6):

The prohibition of taking one’s sister seems to be based on the wellbeing of the state, for if taking a sister were permitted, most men would marry their sisters, each family would thus become a people unto itself, the families would not intermarry or mix with each other, and the nation would not become one people, but would turn into many peoples that would be distant from each other and not love one another.

Klein notes: “Shadal’s view corresponds to the position later taken by, among others, Sigmund Freud, who claimed that ‘psychoanalytic investigations have shown beyond the possibility of doubt that an incestuous love choice is in fact the first and regular one.’” Klein goes on: “However, this view has been contested by others, including researchers who found that there was a complete absence of love affairs or marriages between males and females who were raised from childhood in the same communal children’s facilities on Israeli kibbutzim, and that such avoidance was entirely voluntary,” and he provides a reference to a recent scholarly book on the subject.[4]

As someone who loves, respects, and studies Shadal’s commentary, I have used all the available versions at different times. Klein’s edition is the easiest to use—obviously for those English speakers who need help coping with the Hebrew text—but it is also helpful to Hebrew readers.

Klein himself realizes the irony of making Shadal’s work so available to English readers. He writes that the fact that his book was “necessary in order to bring his work into broad public notice . . . is one that the author himself would have found deeply disappointing. Shadal had a ‘burning zeal for the Hebrew language,’ holding that its revival was ‘essential to the preservation of the honor of the Jewish people,’ and considering it ‘vital to the understanding of the Bible to gain full mastery of the Hebrew idiom in all its phases.’” Indeed, Shadal once received a letter in German from his younger contemporary, Rabbi Samson Raphael Hirsch, to which he reacted by writing a sarcastic ditty, in Hebrew, making fun of Hirsch. Shadal, the Renaissance man, read German fluently. But he expected that rabbis would write to each other in Hebrew.

Nevertheless, the Jewish world, including the Orthodox part, now contains many functionally unilingual, English-only Jews. It’s a significant gain for them to be able to enjoy Shadal’s creative, in-depth Torah commentary that combines traditional and modern approaches to the Bible.

[3] Usually Leibowitz admired Shadal, but from time to time she was unusually sharp in her criticism. For example, see her Iyyunim be-Sefer Devarim, 210-211, where she takes strong issue with Shadal’s explanation of Deuteronomy 22:6-7. For a brief discussion of Leibowitz and Shadal, and of the question of Shadal’s Orthodoxy, see my article here.

[4] Freudian or not, Shadal’s comment on brother-sister incest is surprisingly similar to the theory proposed in the fourteenth century by Rabbi Nissim of Marseilles in his Torah commentary. Nissim writes (my translation):

Perhaps the reason why incest is forbidden is in order to cause unrelated people in the same country to marry each other. The result of this will be an increase in the feelings of love and closeness in the country; it will lead to the country becoming like one family. The country will not be divided into separate warring factions. Plato taught that the best state is one where people consider each other brothers.  . . . In the end, we are all brothers in any case. We all ultimately come from one mother and one father. That is why it is a requirement for all countries that families should marry each other so that the state will become united and it will not be divided into factions and fighting groups, “So that the land will not spew you out.” (Leviticus 18:28)

Nissim’s commentary was available only in manuscript until it was published in 2000 in a volume edited by Professor Haim Kreisel of Ben-Gurion University of the Negev. It is possible that Shadal’s extensive research in manuscripts extended even to this relatively obscure work, or, more likely, he and Nissim came up with the same idea independently. See also the thirteenth-century commentary of Nahmanides (Ramban) who writes (in his commentary to Leviticus 18:6) that, were it not for Torah law, “No marriage would be as appropriate as for a man to marry off his daughter to her older brother. He could then give them his estate as inheritance, and they would be fruitful and multiply in his home.”