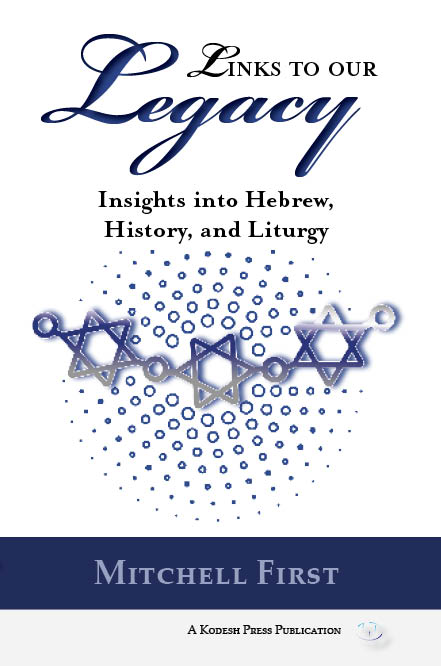 Book Review: Links to Our Legacy: Insights into Hebrew, History, and Liturgy by Dan Klein

Review of Links to Our Legacy: Insights into Hebrew, History, and Liturgy, by Mitchell First (Kodesh Press, 2021).

A New Book Brings Hebrew Language and Liturgy to Life

On my first trip to Israel 50 years ago, I took a bus tour of the Galil with an overnight stop at Kibbutz Ayelet HaShahar. I couldn’t help but notice the kibbutz’s distinctive emblem, which featured a leaping gazelle and a star:

The usual translation of “Ayelet HaShahar” is “morning star,” but the literal meaning is “gazelle of the morning.” What was the story behind such a pretty but enigmatic expression? Where did the term come from, and how did it come to be translated as “morning star”? All these years later, I have Mitchell First to thank for supplying an answer, or actually a plethora of possible answers, in his new book, Links to Our Legacy (Kodesh Press, 2021), a treasure house consisting of 34 articles on Hebrew word roots, 25 articles on Jewish history, and seven more on Jewish liturgy.

I have been following First’s work for years now. He has a J.D. from Columbia Law School and an M.A. in Jewish history from Yeshiva University’s Bernard Revel Graduate School. One could say we are kindred spirits, with my own Y.U. and law school education and our common avocation as “independent scholars” of Judaica.

First’s approach to scholarship is reminiscent of aspects of Nehama Leibowitz’s, who generally collected, compared, contrasted, and critiqued the views of others rather than offering entirely new content of her own. But just as Leibowitz did, First puts this approach to fine use, writing in a scholarly yet accessible style (with occasional touches of endearingly corny humor). The result is that we are not only informed but entertained and occasionally even startled, finding answers to questions that, in many cases, we never thought to ask but should have.

To see how First accomplishes this, it is instructive to survey his earlier works before exploring Links. The first of First’s books is Jewish History in Conflict (Jason Aronson Inc., 1997). Subtitled A Study of the Major Discrepancy between Rabbinic and Conventional Chronology and based on First’s M.A. paper, this book meticulously examines the clashing views of the Seder Olam Rabbah—the classic rabbinic chronological work attributed to R. Yose b. Halafta of the second century C.E.—and the “conventional” chronology based on Greek and Persian sources, specifically with regard to the length of the Persian and Second Temple periods of Jewish history.

Yes, this discrepancy matters, because it represents one front in a longstanding culture war about how to determine the “truth.” According to some, accepting the conventional chronology that most of the world embraces is unthinkable for an Orthodox Jew, given that it contravenes the Talmud, Rashi, and Tosafot. And yet, reviewing more than 100 Jewish sources from ancient to modern, First shows that there has been a variety of views expressed on this issue, even among traditionalists. And he concludes that the Seder Olam chronology may best be explained as an attempt to formulate a time frame that would fit in with certain predictions in the Book of Daniel, regardless of whether this time frame was compatible with the “truth” that could be obtained from outside sources. First explores the matter in a rigorous and—it must be said—courageous way, shedding light on a controversial but important topic that many Orthodox Jews may have wondered about.

First’s second book, Esther Unmasked: Solving Eleven Mysteries of the Jewish Holidays and Liturgy (Kodesh Press, 2015), continues the author’s investigations into Jewish history but also branches out into a new area of focus, the origins and meanings of particular Hebrew words and phrases. The essay that the title refers to delves into the question of how to identify Ahashverosh and Esther in light of ancient non-Jewish sources. In this instance, there is no real conflict between Jewish and outside authorities, but for centuries scholars were stumped by the apparent lack of any clear parallels to these royal names in the Greek sources. First explains that it was only in the nineteenth century, when Old Persian cuneiform was at last deciphered, that it became clear that the king the Greeks called Xerxes was actually named Khshayarsha, only a few vocal shifts away from “Ahashverosh.”

As for Esther, First theorizes that her identity has remained hidden in plain sight. The Greek historians Herodotus and Ctesias mention a wife of Xerxes named Amestris, and they depict her as a cruel and vengeful woman, leading some scholars to suggest that she was Vashti. But First points out that “Amestris” is not all that dissimilar from “Esther.” Furthermore, identifying Esther with Amestris “does not mean that one has to accept the tales told about her by Herodotus and Ctesias,” says First, because these writers were often unreliable and might well have been engaging in anti-Persian polemics. Thus, First sides with the relatively few authorities who have made this identification, and has made a scholarly topic more accessible to the lay reader.

Other investigations included in Esther Unmasked involve the origin of the “Fast of Esther” (an innovation in Geonic Babylonia that actually had nothing to do with Esther’s three-day fast in the month of Nisan), the original format of the Mah Nishtannah (there were only three questions), and the true meaning of the phrase recited at the Seder, Arami oved avi (the interpretation “An Aramean [Laban] sought to destroy my father” is an ancient one, but the more literal “A wandering Aramean was my father” was a mainstream Tannaitic interpretation, not a later introduction).

Esther Unmasked is mostly a collection of articles that First had first written for the journal Hakirah and seforimblog.com. First’s third book, Roots and Rituals: Insights into Hebrew, Holidays, and History (Kodesh, 2018), is instead a collection of his weekly columns for the Jewish Link (a newspaper that covers New Jersey, where First resides, and also New York and Connecticut). Some of the 62 topics addressed in this book are the origin of the controversial blessing “Who has not made me a woman,” suggested connections between the words zakhar (male) and zekher (memory) and the words lehem (bread) and milhamah (war), an examination of wordplay in Tanakh, and a look at biblical words of Egyptian origin.

And now comes First’s fourth book, Links to our Legacy, once again an anthology of Jewish Link articles, although enhanced with additional material and footnotes. Here are a few of the book’s highlights:

For his sources and authorities, First employs an eclectic toolbox: dictionaries and concordances such as Brown-Driver-Briggs, Koehler-Baumgartner, Jastrow, Mandelkern, Tawil, and Ernest Klein, and biblical commentaries from Rashi and Shadal to Samson Raphael Hirsch and Mossad HaRav Kook’s Daat Mikra.

Now then, what’s the story with that odd term Ayelet HaShahar for “morning star,” that I began with? First notes that the initial appearance of the term in Psalm 22:1 is ambiguous. It appears as part of the psalm’s superscription, suggesting that it serves as a musical instruction to the reader or performer—perhaps it is even the name of a musical instrument. First offers four possible interpretations by Rashi and five more by Radak (including the instrument approach), but instead endorses the modern theory that Psalm 22 was meant to be sung to the tune of a then popular song called Ayelet HaShahar, “The Doe of the Dawn.” In this discussion, he observes that the term was understood (or misunderstood) by some authorities quoted by Radak to mean “strength of the morning,” which may have been taken to imply “sunrise” or “morning star.” Whatever the etymological truth may be, the kibbutz chose a lovely name and an evocative emblem to go with it.

Again, we owe Mitchell First our thanks for tackling such questions and broadening our Jewish horizons. Most importantly, in this age of shocking ignorance of Hebrew, even among better-educated American Jews, First performs a valuable service by sharing his enthusiasm for the Hebrew language and, hopefully, passing it along.