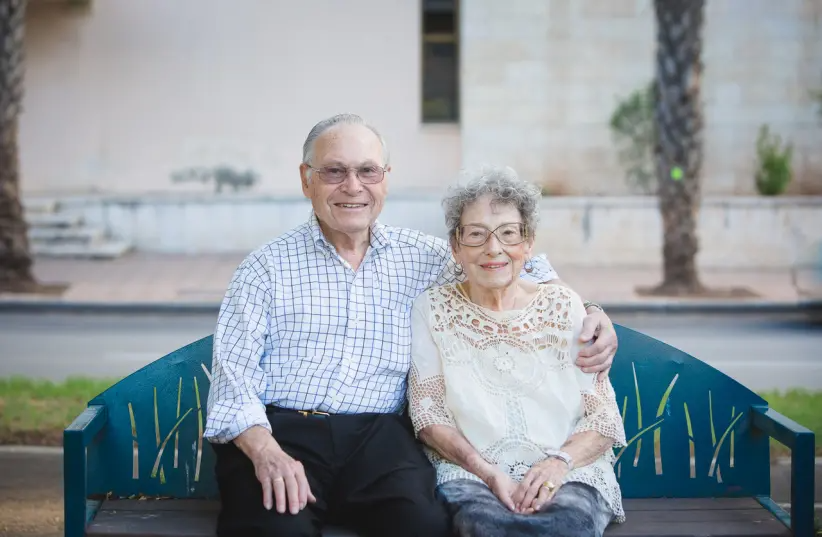 About Our Author: Dr. Vivian Skolnick

Meet the American couple who moved to Israel in their 90s

Irving Skolnick, 96, was born in St. Paul, Minnesota, and Vivian Blair, 92, was born in Norfolk, Virginia. The Skolnicks married in August 1949.

Though their last port of call before aliyah was Hollywood, Florida, Irving and Vivian Skolnick called Chicago home for more than 70 years.

Names of institutions, neighborhoods and street names familiar to Chicagoans – such as the Hebrew Theological College, the Ida Crown Jewish Academy, the Board of Jewish Education of Chicago, the South Side, the West Side, West Rogers Park, Michigan Avenue and Pratt Boulevard – trip off their tongues, declaimed in their familiar, and natural (to this writer) Midwestern accent. It’s pure Chicago.

Irving Skolnick, 96, was born in St. Paul, Minnesota, and came to Chicago to study at the Hebrew Theological College in 1939, when he was 14. Smiling, he attributes this decision to the encouragement of his grandfather, the late Rabbi Nachman Barr, who had studied at the Mirrer Yeshiva in Lithuania before settling in St. Paul, Minnesota, in 1919. Rabbi Barr left St. Paul for Chicago and taught at the HTC from 1923 until 1947.

“He said I should go to the yeshiva,” says Skolnick, who studied there for seven years. “That what turned my life around.” Like most Chicagoans, Irving pronounces the letter “i” in “yeshiva” like the “i” in “it,” unlike the more common pronunciation of “yesheeva.”

Vivian Blair, 92, was born in Norfolk, Virginia, where her father served as the town’s Orthodox rabbi. She moved to Chicago in 1947 with her family at age 18, when her father was hired by the Hebrew Theological College to work in fundraising.

Irving and Vivian were introduced by mutual friends. At the time, Vivian was working as an X ray technician. Following their first meeting, Irving contacted Vivian. “He called me, and I said ‘Who’?” recalls Vivian. Irving explained that at the time, Vivian was almost engaged to a doctor from New York who was living in Chicago. “But then I entered the picture,” he chuckles, “and Vivian was not sure whether to go on a date with me because of her connection with the doctor. In three weeks, we were engaged.”

The Skolnicks married in August 1949, living first on Chicago’s West Side, then the center of the Orthodox Jewish community, and later moved to Hyde Park on the South Side, which had its own active Jewish community. In 1970, they moved to the city’s North Side, sending their two children to the nearby Ida Crown Jewish Academy.

Irving spent his entire career in Jewish education after obtaining his PhD from Spertus College of Judaica, in conjunction with the University of Chicago in 1957. “It’s interesting,” he points out, “because my name ‘Skolnick’ is the Russian word for ‘student.’ I was a student and was associated with a school my entire life, one way or another either as a teacher, principal, or supervisor.”

Skolnick served as principal of the Hebrew school at Congregation Rodfei Zedek in Hyde Park for 17 years, educating a generation of students. “To this day,” he says, “I meet students from my years as a principal.”

One of his more notable students was actor Mandy Patinkin, who later became famous for his roles on Broadway and in well-known films and TV series, including The Princess Bride, Homeland, and Chicago Hope.

“Mandy was an ‘acting out’ student,” says Skolnick with a smile. “He was sent to my office very frequently.” Vivian adds, “I always told him that one day we would come to see him on Broadway, and we did.” The Skolnicks stayed in touch with him for many years, and he frequently visited them in Florida.

IN 1970, Irving left Rodfei Zedek and became a supervisor for the Board of Jewish Education in Chicago, working with numerous schools in the system. He remained at the BJE until his retirement in 1990. During that time, he also introduced the study of Hebrew language into Chicago’s junior colleges and became the first professor of Hebrew at the City Colleges of Chicago. One of Skolnick’s signal accomplishments was becoming the first Midwestern educator to become national president of the Jewish Educators Assembly.

“From the time that I retired,” says Irving, “my wife had a flourishing career.” Vivian interjects with a laugh, saying, “Even before.” Vivian earned her PhD from the Illinois Institute of Technology in 1974 and became a psychoanalyst.

Skolnick did not see any conflict. “Neither world at that time understood that for me, the Torah was the greatest psychology book ever written. I had all the material I needed.”

In 2009, she authored The Biblical Path to Psychological Maturity – Psychological Insights into the Weekly Torah Readings, in which she interprets the stories, rituals, and laws of the weekly Torah portion from a psychological standpoint.

Vivian was the first Orthodox Jewish analyst in the Midwest, treating private patients and supervising psychologists and psychiatrists. She says, with a degree of pride, ”I never allowed it to interfere in terms of my pressuring patients to be observant or non-observant. I was a person who crossed two lines at the same time.

“I loved every minute of my practice,” she recalls.

Irving concurs and says that Vivian was a natural. “Many people go into this field for professional reasons. Vivian intuitively always was very insightful into people’s personalities, and the formal part of her education formalized a feeling that she had from the very beginning. That was the reason why she was so successful in her practice.”

Vivian actively combated sexual abuse in the Jewish community and made people aware of the issue. “We had to first educate the rabbis, and then with their support, we had a number of seminars to acknowledge we had problems,” she says.

THE SKOLNICKS had owned a winter apartment in Florida for 30 years, and in 2014, they finally left Chicago, making their full-time residence in Hollywood. In 2019, their daughter convinced them to move to Israel to be with her and family, which include the Skolnick’s grandchildren and great-grandchildren. (They also have a son, daughter-in-law, and grandchildren in Woodmere, NY).

“Because of our age,” says Irving, “she felt it was a time not to be alone, but rather a time to be with family.” The Skolnicks made aliyah in August 2019, six months before COVID struck, moving to a comfortable apartment close to their daughter and son-in-law, in Modi’in.

The adjustment to Israel has not been entirely smooth. Vivian does not speak Hebrew, and last December she broke her hip from a fall, limiting her movement. Says Irving, “Compared to our lives in Florida, where we were living for the last seven years, there is no comparison – the conveniences, the language – we were more independent than we are here.”

Irving, who has a degree in Hebrew literature, says that his knowledge of Hebrew far exceeds his fluency, though his daughter says he is reasonably fluent in Hebrew. He attends a synagogue populated by other former Americans, in a nearby apartment building, and as his daughter says, “He is the oldest one, but he doesn’t look the oldest.” Vivian adds, “And he doesn’t walk like the oldest.”

Despite the difficulties adapting, they are happy that they moved. “We are fortunate that we are here with family. We would be totally isolated had we stayed in Florida,” she says.

“Spiritually,” Irving says, “when I go to the balcony and look out the western exposure facing Tel Aviv and the western coast of the State of Israel – when I say the Shema Yisrael, I don’t close my eyes. I open my eyes, and I say Shema Yisrael A-donai Elokeynu A-donai Echad, and I look at this great expanse and have a feeling that I never had – even though we had a penthouse apartment in Florida, overlooking a beautiful golf course and a casino. It’s not the same.”